Addiction has suffered historically from a tendency to equate it with a failure of character, a lack of willpower as opposed to a medical condition outwith the sufferer’s control. Whilst this is a perception that still persists within society—not just in relation to addiction but also a whole range of mental health issues—such attitudes are slowly changing, and addiction is now formally acknowledged as a complex brain disorder that results in compulsive substance misuse or other behaviour in spite of harmful consequences to the individual—and often to their interpersonal relationships in turn. Risk factors for addiction are considered to be a combination of genetic and environmental or experiential in nature, e.g. trauma, including epigenetic inheritance—a powerful notion which can see its destructive nature persist through generations.

The course’s introduction to the condition also considered how addiction can co-present alongside other mental health problems, as well as potential treatment options. A challenge here is that approaches that are effective for other mental health conditions can be less so for its sufferers, who will often be unable to contemplate surrendering their addiction and therefore are prone to treat with disdain such attempts to have them do so.

Requiem for a Dream is a difficult watch in a number of ways. Based on the novel of the same name by screenplay co-writer Selby—himself a drug addict whose hallmark was exploring the dark underbellies of life—it depicts, dramatically and unremittingly, the downward spiral of four people who fall under the powerful grip of addiction. It focuses upon widow Sara (Ellen Burstyn), her wayward son Harry (Jared Leto), his girlfriend Marion (Jennifer Connelly), and friend Tyrone (Marlon Wayans).

In its familial connections, there is a hint here of the potential inheritability of addiction, although the experiences of mother and son are quite different. Sara cuts a lonely figure, whiling her days away watching TV, but whose luck appears to take a turn when she wins a spot on a gameshow. As a consequence, though, she starts taking prescription amphetamines to lose weight for her upcoming appearance, fixated on being able to fit into a red dress once favoured by her deceased husband, a totem of what she has lost in life. She begins to suffer stimulant psychosis and is ultimately committed to a psychiatric hospital where she receives electroconvulsive therapy. Whilst early on her son implores her to stop taking the drugs, he has his own problems as he starts dealing heroin with Tyrone as a money-making venture, landing them both in trouble with the law. Tyrone ends up having a miserable time in prison, whilst Harry’s problems worsen further as his use of heroin leads to a needle infection in his arm that ultimately finds him needing to have the limb amputated. Meanwhile, girlfriend Marion is pimped out by Harry to help provide financial support for their drug-dealing, leading her into her own downward spiral of ever more demeaning situations. A feel-good, optimistic movie about people bettering their situations this is not.

The film is segmented into three signposted chapters of summer, fall, and winter as it depicts a downward spiral from initial happiness through an increasing set of challenges and then hitting rock bottom. In addition to this overall structure, a visual method that Aronofsky uses to portray drug use is a recurring series of very short shots cut together. I found these annoying in their repetition over the course of the film and increasingly intrusive to my engagement with the narrative, but my takeaway is that this was entirely the point of them.

Notably, the cast and crew have been reluctant to discuss the movie since its production, so harrowing was it to film certain sequences. I know a little of how they might feel from merely watching the film; I’m not sure I could sit through it a second time, so visceral are its depictions of addiction and its ultimate effects. It is, however, a powerful representation of the condition, of its psychological allure, and of how drug abuse ultimately acts to undercut any attempts to improve self-image or the experience of being in the world. As Aronofsky explains in the DVD commentary for the film, notably over a scene in which Harry hallucinates an alternative reality in which a healthy, happy Marion—and again, significantly, in a red dress—is waiting for him at the end of a pier on Coney Island under a clear, blue sky:

Ultimately, Requiem for a Dream is about the lengths (to which) people go to escape their reality. And that when you escape your reality you create a hole in your present, because you’re not there—you’re chasing a pipe dream of the future. And then you’ll use anything to fill that vacuum. So it doesn’t matter if it’s coffee, if it’s tobacco, TV, if it’s heroin, if it’s ultimately hope, you’ll use anything to fill that hole. And when you feed that hole—just like the hole in Jared’s arm—it’ll grow and grow and grow until, eventually, it will devour you. 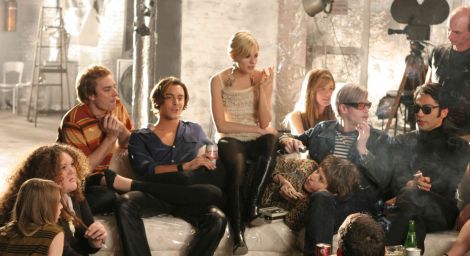 All of the films under consideration here—and, of course, many more besides—speak to personal experiences of one sort or another, but what is on display in Factory Girl is a biographical representation of an actual life. Edie Sedgwick (Sienna Miller) was an actress and model who found herself dubbed an “it girl” as part of the sociopathic Andy Warhol‘s (Guy Pearce) strange, cult-like circle of Superstars for a time in the Sixties, briefly attached to Bob Dylan (Hayden Christensen), but ultimately spurned by them both. Following a period of recovery and a hospital stay, she died at the age of twenty-eight from an overdose of alcohol and barbiturates.

I found it difficult to like this film, perhaps because of how unrelatable and unlikeable I found most of its characters, but I was struck by the tragedy of Sedgwick’s short existence, and of the psychological examination of her life that was proffered during the course. She came from a wealthy and prominent family background but her father was narcissistic, remote, abusive, and a philanderer. She once walked in on him having sex with a mistress, and his response was to accuse her of imagining the entire encounter and to have her prescribed tranquillisers. Later in life, in the grip of alcohol and drug abuse after her friendship with Warhol had soured and with her work for him having gone unpaid, she accused him of ruining her life and of not valuing her.

The theory that was introduced in relation to Sedgwick’s life was Sigmund Freud‘s 1914 paper “Remembering, Repeating, and Working Through Childhood Trauma“, which posits that a patient who has repressed a damaging life experience through disengagement and detachment as opposed to coming to terms with it is prone to acting this out over and over again subconsciously. Thus, Sedgwick’s dysfunctional relationship with Warhol is theorised to echo that with her father. It is a powerful idea, and one that Sedgwick’s tragic life seems to reflect.

The most affecting of all three films selected for this theme for me was Shame. Considered the middle film in director Steve McQueen’s thematic trilogy of films on confinement alongside Hunger (2008) and 12 Years a Slave (2013), each of which include a collaboration with Michael Fassbender, it follows the lives of two siblings, Brandon (Fassbender) and Sissy (Carey Mulligan), their unusual, tense relationship with one another, and their self-destructive behaviours.

Brandon appears, superficially at least, to have an ordinary and moderately successful and functional life in New York but is revealed through the course of the film to be a sex addict, and in unflinching and uncompromising detail. He masturbates, consumes pornography, and has both virtual and in-person encounters with sex workers—all of this and more, and all of it repeatedly, compulsively, and joylessly. When his sister, Sissy, comes to stay with him uninvited, their odd relationship is revealed, her own emotionally unstable behaviour hinting at borderline personality disorder,  and his self-destructive routine starts to unravel.

Whilst still argued by some to be a contentious or even mythic form of the condition, sex addiction has been demonstrated to correlate to drug addiction in terms of how it affects brain activity, and its depiction here is harrowing, the film’s sexual explicitness anything but erotic. In an interview featured on the film’s DVD release, Fassbender accurately describes Sissy as “explosive” whilst Brandon is “imploding”, “seeking sexual encounters… to numb away any emotional content”. He is caught in a perpetual cycle of momentary gratification following by self-loathing and shame that serves to isolate him from anything that approaches true intimacy, the one person with whom he finds himself unable to be physically intimate being a co-worker with whom he goes on an uncomfortable date.

Both Fassbender and Mulligan are superb in their roles, utterly believable and sympathetic under McQueen’s considered direction. Also powerful is the film’s combination of sexual explicitness alongside its restraint at offering straightforward explanations or solutions. It hints—but only hints—at the siblings’ conditions as contrasting reactions to a shared history of childhood sexual abuse, with Sissy delivering a telling line that surely says much about the underlying nature of addiction for so many:

We’re not bad people; we just come from a bad place.

Shame was for me, then, the stand-out from this selection, and I recommend the film in particular for its challenging but utterly believable and revelatory depiction of a form of addiction that is perhaps more misunderstood than most.

I will close by reminding readers of this blog of my recommendation to follow course lecturer Mary Wild on Twitter and to give the Projections podcast a listen, which is co-hosted by Mary and has discussed different movies around many of the same groups of mental illness covered in this course, and much more besides (most recently beginning an exploration of the world of fashion in film). Next: three selections that exemplify narcissism.

One response to “Requiem for a Dream / Factory Girl / Shame”