Silk (2011-14) is a primetime drama for BBC One set in the world of a London legal chambers whose barristers compete professionally with one another in order to gain the rank of Queen’s Counsel (QC), termed “taking silk”. Writer Peter Moffat drew upon his own considerable experience from working at the Bar in creating the series, and this lends the drama an authenticity and gravitas that underpins its tales of moral dilemmas, courtroom politics, and the complex personal lives of its ensemble of barristers and clerks, as well as those of the clients they represent.

This series opener focusses upon Martha Costello QC (Maxine Peake), and quickly establishes her distrust in and contempt for the police as she fails to win an appeal for a client she believes to have been framed by the investigating officers. This proves informative when she soon afterwards finds herself defending her Head of Chambers’ son, David Cowdrey (Alexander Arnold), after he is arrested during a kettling incident at a demonstration and charged with killing a police officer in a violent outburst.

Tensions between the legal team and the police run high under the circumstances, and are further compounded by David’s behaviour, as he finds it seemingly impossible to open up to Martha and intimates that someone is threatening him in his cell. At first his reactions are perceived as those of a frightened young man being held in custody for the first time in his life but then, in a private conversation during the trial in which Martha tries once again to get him to open up to her, she comes to realise that he is suffering from schizophrenia: 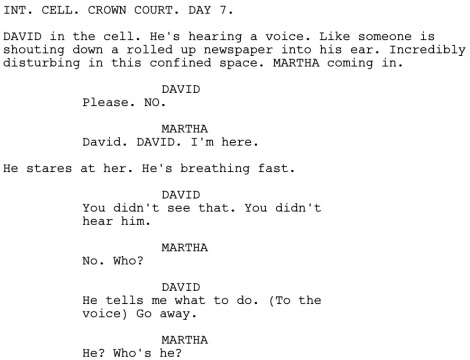 Schizophrenia, a psychotic disorder that leaves sufferers unable to distinguish between real thoughts and sensory information as opposed to their own imaginings, is arguably one of the most misunderstood and oft-misrepresented mental disorders of them all. Hearing voices, as David is revealed to do, is not uncommon, and is well-represented here as a deeply unsettling experience for the sufferer in a scenario that is also seminal to the unfolding drama.

Schizophrenics are also often represented as violent, whilst in reality they—and those with mental health problems in general—are significantly more likely to be the victims of crime than its perpetrators. It is unfortunate, then, that the main storyline of this episode centres upon David’s killing of a police officer. It is revealed that he acted under duress and extreme anxiety, having been targeted by the police after he took photos of an undercover officer in the crowd, but his reaction is undeniably one of extreme violence. It is unhelpful to see primetime drama act to reinforce such a corrosive  stereotype.

Perhaps of more interest is what happens next. Martha consults with two colleagues, Clive Reader QC (Rupert Penry-Jones) and Caroline “CW” Warwick QC (Frances Barber). It is clear from their discussion that if Martha reveals David’s schizophrenia to the court then the case will be dismissed and a retrial would take place, the result of which would almost certainly involve David being taken into psychiatric care. The barbed and straight-talking CW steps in to suggest to Martha that she should avoid this at all costs, revealing for the first time her own damning experience on a psychiatric ward as a teenager, from which she has never fully recovered:

Martha follows CW’s advice and goes on to win the case for David having been able to prove that the police have tampered with evidence and documentation in order to seek a certain conviction. In this somewhat uneven instalment of an often excellent series, the representation of schizophrenia is a confused one—at times sensitive, but also misrepresentative in terms of David’s deadly outburst. It delivers a damning if sensitive indictment, too, of institutions designed to help sufferers through their psychotic episodes, even though CW has gone on to have a very successful and high-functioning career. And yet it also ends on a hopeful note, as the career-driven Head of Chambers, Alan Cowdrey (Alex Jennings), ultimately elects to sacrifice his distinguished career in order to be there for his son. They face an uncertain future as a family, but they at least do so informed by the nature of the difficulties they must overcome.

This episode is available to viewers in the UK through the BBC iPlayer until 30 March, and the script is available to download from the excellent resource that is the BBC Writers’ Room.