Comedy and mental health can make for strange bedfellows. There is a significant danger that, in rending humour from situations or characters featuring mental illness, the condition itself is belittled or merely ridiculed as part of the process. It could be argued that Frasier (1993-2004), the long-running and extraordinarily successful sitcom centred upon neurotic psychiatrist Dr. Frasier Crane (Kelsey Grammer), risks walking this line more than most. Yet the bulk of its humour comes not from the plights of his patients but from Frasier himself and, in the example of “Good Grief”, the series’ sixth season premiere, less from Frasier’s mental struggle than it does from his hubris coupled with his inability as a mental health professional to deal with the ups and downs of his own day-to-day life.

I was at an event at Daunt Books in Marylebone a couple of months ago in which psychoanalyst turned author Stephen Grosz discussed his excellent book “The Examined Life“. In answer to an audience member’s question, he explained that one of the most simultaneously rewarding and infuriating aspects of his work is when he has been able to help resolve a difficulty in one of his patients’ lives that he has been unable to address in his own. This was so often the case for Frasier Crane and, for that matter, his neurotic brother and fellow psychiatrist, Niles (David Hyde Pierce). Frasier’s likability in spite of his often snobbish and pompous nature comes from the vulnerability that this fundamental character flaw lends him, and to which we can more readily relate.

“Good Grief” rejoins Frasier and his work colleagues from talk radio station KACL in the wake of them all being fired as a result of a principled but misguided protest he had led against the station’s bosses. Frasier is auditioning for new jobs, and otherwise busying himself with all kinds of activities—such as writing an operetta—to fill his now empty days. He is in a classic state of denial, and his behaviour starts to concern his father, Martin (John Mahoney):

The Kübler-Ross model describes five stages of grief: denial, anger, bargaining, depression, and acceptance. The theory was first presented in 1969 by Swiss-American psychiatrist Elisabeth Kübler-Ross in her book “On Death and Dying” and, whilst not universally accepted, has proven useful to therapists working with those suffering any kind of significant loss. Whilst not presented as a consistent process that those who experience grief will necessarily always undergo, the five stages are presented by Frasier in precisely this order and signalled to the viewer via the series’ trademark title card inserts—often to comedic effect in their own timing.

Frasier moves from denial into anger at a picnic he organises for his former colleagues, tipped into rage on finding that seemingly everyone save for him and his ex-producer Roz (Peri Gilpin) have found employment elsewhere. He gets carried away demonstrating to a child how to strike a donkey piñata, and a pitiful scene follows in which he takes out his frustrations on it in front of the shocked and embarrassed crowd.

Following a party he later hosts at his apartment for his fan club—all three of them—that represents a bargaining phase, Frasier then enters a period of depression that he is unable to escape. His rut in this phase demonstrates that the experience of grief is distinct for each individual. It is also quite evident that he has put on weight from comfort-eating. Concerned, his family and friends do their best to intervene: 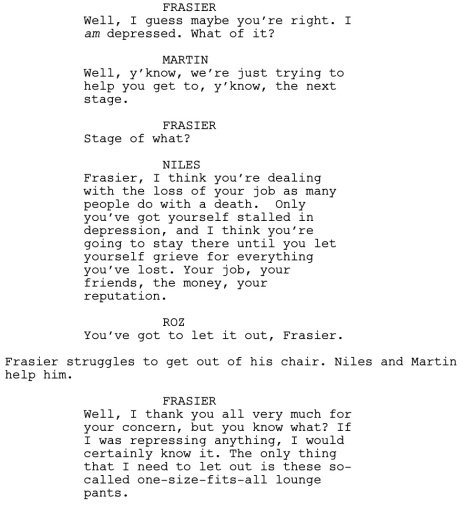 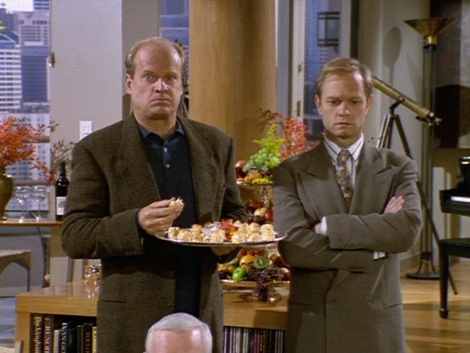 Supported by his family and friends—whose dialogue serves to educate the audience even as it entertains with its punchlines—Frasier sinks into a tearful period of despair before turning a corner. Some time later, he meets with Niles at their favourite local coffee shop, Café Nervosa. Here, it is clear that Frasier has reached the acceptance phase, and is getting his life back on track. What the episode effectively portrays—and without ever feeling exploitative given its choice of situation—is that certain stressful, life-changing events can unbalance anyone’s mental health temporarily as indicated by Kübler-Ross’s influential grief model. In Frasier’s case this has been the loss of his job, whilst the final scene’s punchline brings the theme full circle as it indicates it might just apply to Niles’ imminent divorce: