On the basis of its first instalment, Perception (2012 – ) fits with a trend of television series to primarily portray mental illness as the key to some rare investigative talent. Whilst it is encouraging to see a schizophrenic portrayed as the protagonist as opposed to some crazed killer, the tone set by this show’s pilot episode is broad, and it misinforms the viewer at almost every turn.

Perception focuses upon Dr. Daniel Pierce (Eric McCormack), a college professor in neuroscience and occasional consultant to the FBI at the request of former student now Agent Kate Moretti (Rachael Leigh Cook). Pierce also suffers from schizophrenia, and is shown to suffer from hallucinations and paranoid delusions. In the context of campus life, though, and with the support of university dean Paul Haley (LeVar Burton) and teaching assistant Max Lewicki (Arjay Smith), his behaviours see him accepted as little more than an eccentric academic.

In the first of the rather on-the-nose presentations to his classes that book-end the episode and make up part of the formula, Dr. Pierce outlines one of the core challenges to his character presented by his illness—namely to recognise what is real, and what is not:

Schizophrenia is a psychotic disorder on which views and understanding have shifted over time, both informing and informed by debate and research. Key to its symptoms, though, lies an inability for the individual to discern their own intense thoughts and perceptions from objective reality. It can be characterised by anxiety and suspicion, as well as disorganised thinking that leads to confusing or nonsensical speech and hence difficulties in holding a conversation.

The hallucinations experienced by Pierce are, by contrast, for the most part both coherent and convenient. His professional insights into human behaviour are often enhanced, during the course of an investigation, by hallucinations of characters that offer him advice and lead to breakthroughs in his reasoning. Far from disorganising his thought processes, these intrusive imaginings are shown time and again to represent subconscious leaps that advance the investigations in which he is involved. Essentially, they form a handy plot device. For schizophrenics, however, the voices they hear are far more likely to be critical and unfriendly, generating stress and confusion.

Another area in which Perception falters is in how it falls back on generating comedy from Pierce’s condition. When he bluntly calls an attractive student out for coming on to him then later has Lewicki check that the same student isn’t a figment of his imagination when she is stood practically half-naked in his office, any sense of drama quickly veers towards farce. And when he seeks to alleviate a moment of anxiety caused by the chaos of a police station house by jumping on a chair, donning headphones and conducting the orchestra to which is listening, Moretti is given one of several quippy asides that brand the professor she supposedly deeply admires as “eccentric” or “crazy”. Such dialogue does her character no service, and undermines any serious consideration of Pierce’s condition.

Whist its core portrayal of the condition is fundamentally flawed, it is fair to note that Perception does have some merits. McCormack’s portrayal of Dr. Daniel Pierce is one of the most sympathetic aspects of the episode, and goes some way to elevating the content. Whilst the script calls upon the character to be more charismatic and brilliant than everyone else around him, McCormack makes the most of his more vulnerable moments. A recurring hallucinatory figure is Natalie Vincent (Kelly Rowan), with whom Pierce has conversations that reflect an internal dialogue, such as during this episode following the incident of the student making a pass at him: 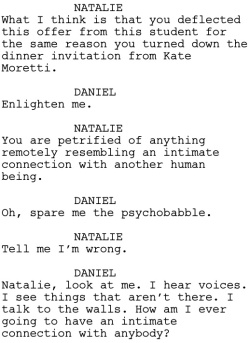 Elsewhere in the episode, some of Pierce’s attitudes ring true, such as in his mistrust of pharmaceutical companies—which, as with my previous post, are here represented as insidious, greedy and corrupt—and in his comments about how those suffering mental illness are more likely to find themselves on the wrong side of the law, and to be treated harshly by its institutions.

Both because and in spite of its serious flaws in both concept and delivery, one thing that Perception has done successfully is to promote much discussion on schizophrenia and how it is represented onscreen. Individuals with personal experience of the condition have compared fiction to reality and criticised the episode’s failure to explore the pitfalls of being an unmedicated schizophrenic. Major media outlets have highlighted its reliance upon gimmickery or used the series as a springboard to address the wider question as to why primetime television has failed to understand the condition.

Dr. Pierce’s closing speech to his class offers further food for thought. In challenging what it is to be “normal”, it blurs the lines between mental wellness and mental illness in a way that encourages consideration of the individual:

For all the faults inherent to its setup, it is perhaps unfair to judge Perception too severely on the sole basis of its first instalment given the potential for character development offered by an ongoing series, and this blog may well return to the series for precisely that reason. It is also fair to say that the series’ representation of schizophrenia is light years ahead of the myth of “split personality” arguably perpetuated by such celebrated films as Psycho (1960), The Shining (1980) and Fight Club (1999).

If future instalments of Perception—which, at the time of writing, is about to launch its third season—can forsake a reliance upon formula, cliche and misplaced humour, and instead champion nuance and authenticity, then perhaps the series may yet add something positive to the perceptions of this illness held by its millions of regular viewers.