It is a year ago today that we lost one of the great actors of his generation: Robin Williams. For this blog’s first foray into the world of cinema, I thought it would therefore be timely—and a tribute of sorts—to consider one of his stand-out roles, a portrayal that is arguably all the more resonant and affecting given his loss, as director Terry Gilliam himself commented shortly after Williams’ death. It also offers some insight into the potentially transformative nature of an actor’s performance in relation to the original screenplay, and so this post will consider that in respect to its core consideration of onscreen representations of mental health conditions.

The film opens with New York shock jock Jack Lucas (Jeff Bridges) taking aim at callers to his late-night talk radio show, only for his arrogant patter seemingly to prompt a regular and already unstable caller into a shooting spree at a restaurant. There is an interesting passing commentary on the psychology of mass shootings (a much broader topic and one for another post), whilst the rest of the film focusses upon the fallout from that event as seen from the perspectives of both Lucas and Parry (Robin Williams), a man who was widowed during the attack and whose life changed dramatically as a result.

Parry is in truth the troubled persona of Henry Sagan, an academic who, unable to cope with his loss, had initially slipped into a catatonic state in the wake of his wife’s death and now lives amongst the homeless as he struggles with mental illness. Jack Lucas’ life has also been transformed in the wake of the shooting; the narrative re-joins his life three years on to find him having fallen from grace and now a depressed alcoholic, working in a video store to make ends meet.

The Fisher King (1991) is a film that sees wildly comic moments sit alongside tragic drama, and demonstrates how—when judged carefully—they can be fitting bedfellows. That quality also reflects an apparent truism in that the lives of many deeply talented comedians and comic actors appear to have been touched by tragedy, depression, or some combination thereof. It is Williams’ own trademark manic comic talents that are initially on display, as he appears on the scene to rescue Lucas from an attack by two thugs even as the former shock-jock was set to throw himself into the Hudson to commit suicide at the end of a particularly bleak night.

That rescue is in itself surreal and hilarious, and this tone is carried forward into the following day’s events as Lucas wakes up in Parry’s dishevelled yet intricate makeshift basement home. In the scene that follows, a manic Parry talks to imaginary “Little People”, and, in a brief hint as to his underlying trauma, stops Jack from exploring a hidden shrine he keeps to his dead wife. Parry then begins to explain to Lucas that he has been chosen to aid him on his quest to find the Holy Grail, and of the Arthurian myth of the Fisher King in a version of that tale somewhat re-imagined to reflect the film’s narrative and its thematic search for healing. Parry has all but forgotten that this was a topic on which he had lectured and written a thesis in his former life; in his deluded state, this academic interest from prior to his personal tragedy has morphed into an imagined reality:

The precise nature of Parry’s mental illness in the film has been the subject of some debate, with suggestions that his psychosis—not least the transformation of the Fisher King myth into a strongly-held belief of his personal reality—suggests schizophrenia as opposed to the more appropriate condition of post-traumatic stress disorder (PTSD). At least one perspective, however, offers evidence that suggests psychosis can indeed be a symptom of PTSD, especially when having suddenly experienced the violent death of a loved one. 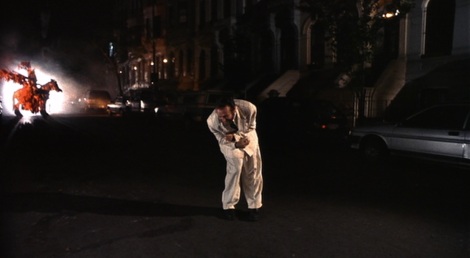 Parry’s grief, illness and fears are embodied by the Gilliam-esque Red Knight, an apparition the untimely appearances of which help grant the film a nightmarish quality that contrasts well with and toughens some of its more mawkish content. Screenwriter Richard LaGravenese—who was nominated for the Academy Award for Best Original Screenplay for The Fisher King—credits Terry Gilliam for, during the development process, having him reinstate “a lot of the odd, weird stuff. [He added] an edge to it that is so important because the script to me could have been so sentimental that it makes your teeth hurt.”

What emerges is what Niles Schwartz termed “a film about trauma, but… clothed in a theatrical buoyancy, so as to obscure—and flee from—reality’s petrifying disorder” (something of a theme in Gilliam’s work). In terms of how mental illness is handled, Keith Phipps’ excellent article for The Dissolve described The Fisher King as “a movie- and metaphor-friendly depiction… that, had it veered off course, would have risked romanticising both instability and homelessness. As it’s handled, however, it works. Growing calmer and more coherent as the story progresses, Parry almost slips back into sanity near the end. But sanity also means remembering losing his wife when a gunman, inspired by something Jack told him on the air, shot up a bar three years earlier.”

In a sequence that perhaps best exemplifies the film’s contrasting yet complementary qualities, after finally managing to secure a double date with the eccentric Lydia (Amanda Plummer) alongside Lucas and his on-off girlfriend Anne (Mercedes Ruehl), Parry breaks down in the street outside her apartment at the end of an evening that has brought him a rare moment of fleeting happiness. The Red Knight then makes a dramatic appearance, pursuing Parry through the streets of New York, whilst onlookers of course see just a raving, deeply-disturbed man fleeing from a hallucination. This sequence is transformed by the sheer gusto of Williams’ performance in its final version, although LaGravenese’s screenplay still reads reads dramatically on the page:

Gilliam has recalled directing this sequence, and tellingly grew concerned for Robin Williams during filming, because of just how invested the actor was in the moment:

This scene wasn’t a challenge to shoot as far as effects are concerned, but it was very hard from an acting point of view, because Robin was tearing his guts out emotionally. The interesting thing about Robin in all of those scenes was that he always wanted to do another take. He felt he had even more anguish and pain to spill out of the character. And I had to really stop him. I had to say, ‘Robin, you’ve reached a point here, way beyond what we expected. We’ve got what we needed. Now you’re just hurting yourself.’

The film balances hope and hopelessness with its promise of redemption or at least acceptance of the past for both Williams’ Parry and Bridges’ Lucas, with many of its character arcs reflecting one another. In spite of himself, Jack Lucas carries out Parry’s “quest” and steals the “Grail” (actually just a trophy) from the home of an aged architect, inadvertently saving the old man from a suicide attempt in the process. In the meantime, however, after his disastrous date Parry has been set upon by the same thugs from whom he rescued Jack—the strong implication being that he sought them out in order to be put out of his misery—and is once again unconscious in hospital. Lucas delivers his prize to Parry there, who finds some sense of reconciliation when he awakes: 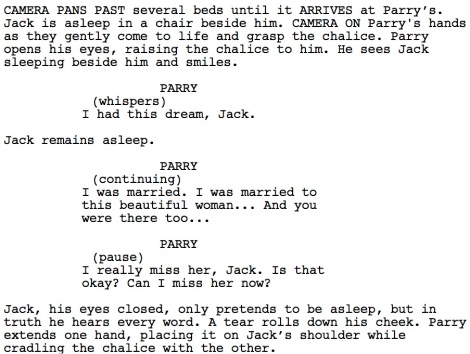 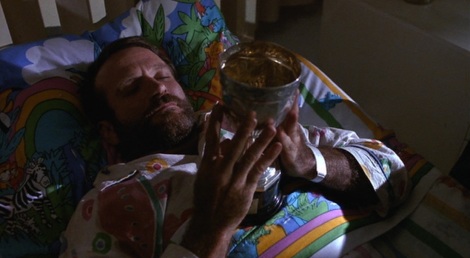 I often analyse the choices that I write about on this blog purely in terms of the onscreen representations of mental illness as a completed piece of work, or sometimes in reference to the original screenplay. But film-making—as with theatre or television drama—is, of course, a collaborative art. So perhaps in a sense Robin Williams’ performance in The Fisher King transcends any black-and-white considerations of the “truth” of mental illness, and offers us something yet more valuable: a soul-bearing interpretation of such material from a man who so deeply felt his own inner darkness. I appreciate that it can be dangerous to over-reach when identifying connections between actors’ personal lives offscreen and the parts they choose to play onscreen, but in this instance Keith Phipps couched it well for The Dissolve:

It’s often unwise and irrelevant to connect actors to the roles they play, and yet something about Williams’ suicide has invited it. He often played men struggling with darkness, sometimes without success, frequently men who used verbal agility and unbridled energy as weapons in the fight. Few movies put that struggle to the fore as prominently as The Fisher King.

Robin Williams’s performance in The Fisher King is often now held up in retrospectives as one of his finest. One such retrospective writes of how well-suited he and Gilliam were as collaborators, describing the director as “another funny man whose comic work dances with the horrors of the world”. I am inclined to agree with Vulture’s description of Williams’ role as Parry as “one of the most perfectly calibrated performances of his career: freewheeling in that way we know and love, but also speaking to a deep sense of loss. It’s the comic as inspired madman, as wounded warrior.” And Gilliam himself has spoken of just how committed the actor was to the role:

The last shot we had to do was Robin running at the end of this scene, in this hysterical state. You can even see the light ever so slightly beginning to come on the river in the background. But Robin was so angry because it was such a crucial moment, and he felt he’d been cheated of his ability to really give this moment his all… So, I had to go up there and tell him, ‘Robin, what we have here is very good. And if we look at the rushes and it isn’t, I promise you I will reshoot it.’ And I had to hug him basically, and hold him. I could feel these muscles that were so tense and so strong, they felt like they could easily rip my head off. But that’s what was so extraordinary about him—how he would commit everything and more to what he had to do. That’s also why I think his character in The Fisher King is in many ways the closest one to Robin, just that range—the madness, the damage, the pain, the sweetness, the outrageousness. That was the role I think that stretched him to the limits.

If you have never seen The Fisher King, or have not done so in a long time, then I urge you to do so. It is an artful, entertaining, and haunting experience shot through with the multitudinous talents of its cast and director, and with a richness to which I can’t do full justice herein. It also offers an utterly unique and valuable representation of mental illness suffered in the wake of human tragedy. And perhaps most of all, it pays testament to the comic and dramatic elements that were combined in the true genius—a word I do not use lightly—of the late, great Robin Williams.