Northern Exposure (1990-95) is an utterly unique creation. Set in the fictional town of Cicely, Alaska, it charts the interactions between Joel Fleischman (Rob Morrow), a New York doctor repaying the state’s sponsorship of his education by serving out an assignment as the town doctor, and its quirky array of inhabitants. Its storytelling is quite gentle for the mostpart, unfolding poetic, whimsical and highly-literate stories on a weekly basis across six seasons of exquisite television. John Cody, a San Franciscan professor, once wrote that its episodes “consistently exhilarate us, the viewers, by honouring our capacity to delight in, to relish the play of intelligence and psychological nuances. Each drama serves a wonderful ten-course gourmet banquet for our starved imaginations: magic, myth, ritual philosophy, religious wisdom, folklore, fantasy, and living sparks from the moral dialectics of diverse characters”.

Many of these qualities are evident in the series’ fifth season opener, “Three Doctors”. In something of a trademark structure, three separate story strands reveal a unifying theme. Joel comes down with a case of “glacier dropsy” (a.k.a. “tundra fever” or “Yukon ague”), a virus that he has never heard of, and the very existence of which he refuses to acknowledge until such acceptance informs a turning point in his recovery. Movie-obsessed Native American Ed Chigliak (Darren E. Burrows) experiences bouts of “sleepflying”, waking up in trees or on the roof of the town bar, The Brick, with no knowledge as to how he came to be there, and ultimately learns that this is as he is being called to become a shaman. And co-owner of The Brick, Shelly Tambo (Cynthia Geary) learns that her involuntary and constant voicing of everything she says in song relates to her innermost feelings about her pregnancy.

What unites each character is their dissociation from the reality of their circumstances. In an early scene, Ed visits Chris Stevens, resident disc jockey and philosopher, to seek his advice as to why he cannot remember his sleepflying episodes. After ruling out drink or a hit to the head, Stevens suggests that such apparent forgetfulness is not such an unusual mental state:

Cicelians habitually normalise behaviour that some might consider more obtuse, and this attitude represents one of the series strengths: its openness and its spirit of universal acceptance. Cicely feels like such a welcoming place to visit, and this is key to the series’ attraction. Moreover, it is an important and worthy mindset to champion. Dr. Fleischman’s attitudes are often shown to contrast with those of the townsfolk—although he slowly comes to embrace Alaskan life as the series develops—and, when Ed visits his surgery for a consultation before Joel becomes bedridden, he offers something approaching a more conventional medical opinion, even as he struggles to resist his own progressive delirium: 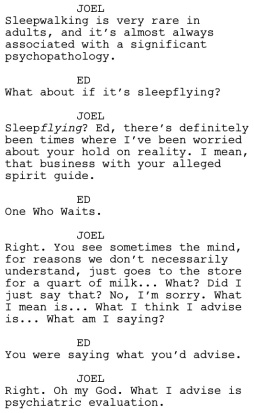 Sleepwalking has a number of potential causes, ranging from a physical illness through anxiety, trauma, to mood disorders such as bipolar, or some form of psychosis. In terms of available treatments, various talking therapies have been developed, and medication is recommended as a short-term and last-resort option only. So Dr. Fleischman’s advice is sound. He would, however, be less than enthused with the form that evaluation takes.

The wonderfully-portrayed character of Leonard Quinhagak (Graham Greene) is a local shaman that is set to become something of a mentor to Ed. In order to explore the underlying reason for his sleepflying, he leads him out into the breathtaking Alaskan wilderness to perform a somewhat unusual diagnosis that involves burying Ed’s fist in the ground overnight, to see what manifests. Ed is understandably eager to learn more:

Leonard displays a refreshing and pragmatic mix of Native American traditions and more modern Western culture, and it is this spirit of cross-discipline inclusivity that the script invites. Ed makes a clumsy but notable attempt at explaining to Shelly why her uncontrollable singing has stopped as suddenly as it began, drawing upon his encyclopaedic knowledge of cinema by offering a comparison with the excellent Awakenings (1990). The Academy award-nominated film, based upon Oliver Sacks‘ memoir, tells of how fictional neurologist Malcolm Sayer (Robin Williams) manages to temporarily bring some patients—including one Leonard Lowe (Robert De Niro)—out of a catatonic state through innovative drug therapy, before their recovery suffers a heartbreaking setback. It proves not to be such a comforting comparison, but Leonard’s own brand of therapy subsequently provides Shelly with the closure that she needs, and that allows her to embrace the forthcoming birth of her first child with a fresh optimism:

It would be inaccurate to suggest that “Three Doctors” in any way offers a realistic portrayal of a dissociative disorder, although Ed does suffer from a form of amnesia, and Joel experiences a distorted view of his surroundings in his fevered state, including a vision of a medical colleague appearing in his home and having an imaginary conversation with him when he is merely on the other end of a phone line.

In keeping with the tone and style of Northern Exposure, though, this is not its intent. Rather, through its mix of gentle drama and quirky comedy, it makes us consider the emotional truths that belie the improbable situations of its characters. What “Three Doctors” so successfully promotes is an accurate portrayal of mental health difficulties as commonplace and with the potential to affect anyone, plus an individualistic approach in the treatment of such conditions. Such an attitude is summed up beautifully in a passage Chris Stevens reads over the airwaves towards the episode’s denouement: 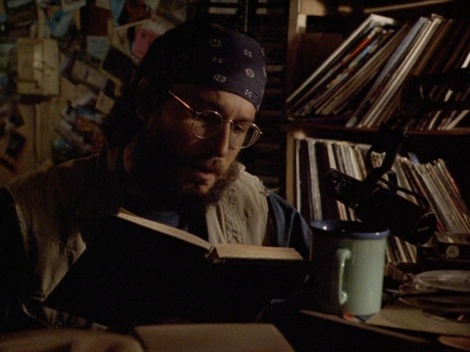