Waking the Dead (2001-11) was a BBC One police procedural drama series featuring the harrowing work of a CID Cold Case unit. Significantly, whilst focussing for the most part upon the story-of-the-week, its core cast was sharply characterised, and none moreso than its leader, Detective Superintendent Peter Boyd (Trevor Eve). In the hands of such an accomplished actor as Eve, Boyd became a unique creation, not always likeable but undeniably authentic. As Daniel Percival, a director of some of Waking the Dead‘s later episodes, once remarked, “Boyd is a role he created”.

Arguably, it is through Eve’s work in defining the character of DSI Boyd that the story “Anger Management” (presented over two hour-long instalments as per the series’ regular format) comes to delve into his inner life. Given Boyd’s volatile mood—as frequently endured by his long-suffering team and suspects alike—his visits to a therapist that intersperse the evolving narrative of the investigation feel not just a natural evolution of the character but perhaps even overdue by this midpoint of the series’ fourth year. 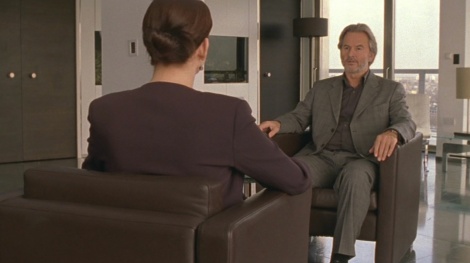 Anger and our need to keep it under control, is a theme underscoring the episode: in terms of the motive for one or more of the crimes under the microscope, in terms of the personal struggles of some of the key characters on both sides of the investigation, and in terms of the dynamics that, unchecked, it can create.

An apparent suicide in a halfway house takes a more sinister turn when the gun used is linked to two unsolved murders from prior decades and, on further investigation, a number of contract killings. One of the suspects, Sam Jacobs (Nigel Terry), has recently left prison after serving a sentence for grievous bodily harm against a neighbour, committed in a pique of jealous rage after the man sexually assaulted his wife. Another, Don Keech (Andrew Kiernan), battles to retain self-control in moments of high stress.

Whilst Boyd’s investigative team and the audience have become used to the Superintendent’s fits of temper, they and we alike are unsettled by quite how good-humoured he is in his first appearances in the story. The reasons for this soon become clear, though, as an odd visual motif of sweeping clouds is used to transition into a number of scenes that offer insight into his therapy sessions to explore his anger issues more deeply.

Therapy—be this counselling or true psychotherapy—is the most common type of talking treatment recommended for those with anger issues severe enough to warrant intervention. Boyd’s sessions seem to take the form of counselling given their focus on the here and now, although they ultimately veer into territory potentially more appropriate to a psychotherapeutic approach.

The representation of these sessions takes care to show the passage of time, with different segments clearly taking place in different sessions over an extended period (similar to the timeline of the investigation itself), as indicated by changes in the time of day, or in Boyd and his counsellor Elsbeth Varley’s (Kerry Fox) outfits. Early sessions find Boyd somewhat cynical and combative to the process itself, quite in keeping with his character and not untypical of the slow building of trust and rapport between patient and therapist. Thereafter, however, the conversations become more constructive, and in one exchange Elsbeth provides Boyd (and the audience) with a good introduction to both the nature and role of anger, in terms that are all too familiar to the detective: 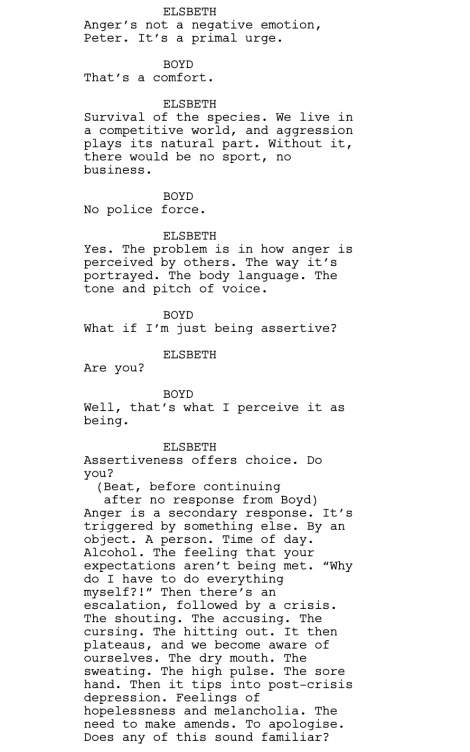 Boyd uses what he has learned to get the better of Keech during the suspect’s cross-examination, exploiting the man’s own anger management techniques to draw information from him. As the investigation evolves further, though, the DSI’s mask slips. The gun central to the investigation is stolen from a safe in the team’s base of operations, and Boyd turns his wrath on the security detail for allowing such a crucial breach to occur. Subsequently, his forensic scientist Dr. Frankie Wharton (Holly Aird) receives similar treatment when it becomes clear that she has been less than forthcoming over the circumstances of the theft in order to preserve her pride. And the toxic and contagious nature of the dynamic Boyd has fostered in his team becomes apparent when his stressed-out Detective Inspector, Spencer “Spence” Jordan (Wil Johnson), adopts similar raging behaviour in order to get results.

There are moments of black humour too, though, such as when Boyd retreats to his office and starts reciting lines from “The Tempest” to himself as a calming mechanism only to be interrupted by the comparatively soft figure of his confidant and psychological profiler Dr. Grace Foley (Sue Johnston). Even as she seeks to check how he is in the wake of one angry outburst, he repels her concern by citing his counsellor’s terminology: “Not now, Grace. I’m having a post-crisis depression.” 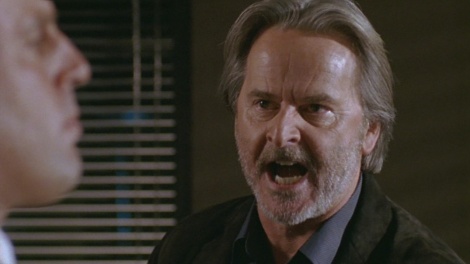 Waking the Dead very much capitalises upon the audience’s familiarity with the dynamic between Boyd and the rest of his team. Their scenes together are played very naturalistically, which is testament to the fine ensemble performance of all the series’ leads. So when Elsbeth challenges Boyd to give an example of a work situation that makes him angry we could probably give her a long list, even whilst Boyd is initially reticent to share one of his own in a scene that is intercut with fractious moments of the investigative team trying—and singularly failing—to collaborate as a unit: 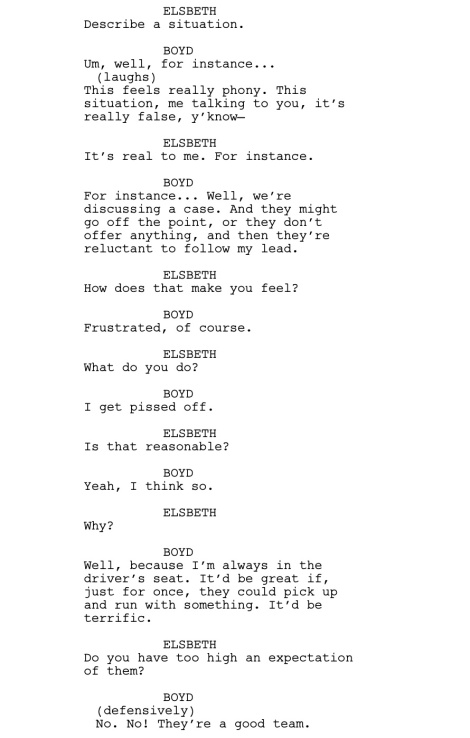 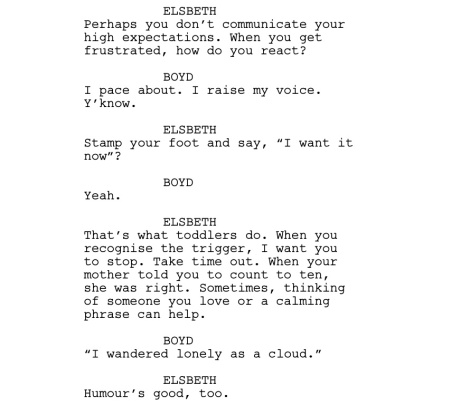 There is authenticity, too, in how Boyd only arrives at his personal truth after any number of sessions with his therapist. The dialogue, its delivery, and the direction in this scene—one punctuated by lengthy silences—are all superlative as he is prompted into his revelation through consideration of the nature of the very calming mechanism he has selected. Boyd’s choice of text is more telling than perhaps even he first recognised: 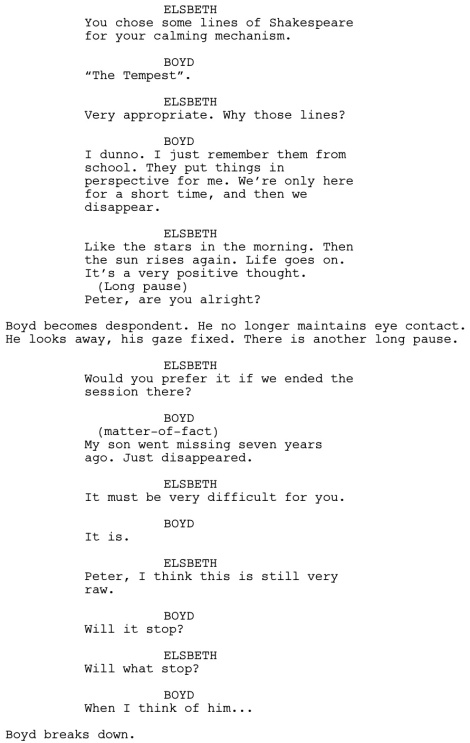 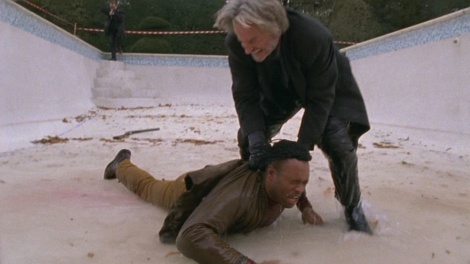 The scenes between Boyd and Elsbeth all take place in the story’s first instalment, whilst the second sees the investigation reach its climax and therefore is much more procedural in nature. The themes established through his therapy sessions continue to play out, though, and indeed Boyd still gets to vent his “righteous” anger at appropriate moments whilst, crucially, keeping his cool at others. When he finally comes face-to-face with the killer, Boyd takes a punch to the face that leaves him stunned for a good few minutes, but is ultimately able to manipulate the situation to get the better of his opponent, now himself wounded and trapped in a disused swimming pool. Having disarmed the man, though, Boyd’s emotions get the better of him and he half-drowns his cornered quarry before armed backup arrives and brings the situation under control.

Anger has its time and place, the story tells us. Yet it can also be poisonous and counter-productive, and we must recognise and address it when it becomes a serious problem. Boyd’s own anger stems from a heartbreaking trauma that defines both his character’s motivation and behaviour. This episode makes explicit the link between his demons—little referenced in the series at this point—and their outward manifestation. Detective Superintendent Peter Boyd is a character we root for, in spite of—and perhaps even because of—his flaws as a human being.

If I had a criticism it is that the series too quickly sets aside the personal epiphany that Boyd has in “Anger Management”, eschewing any long-term character development and instead maintaining the established dynamic of the team. By the next episode, he is back to his brooding and often seething self, and any sense of continuity is lost. Then again, he has more trauma in store in future episodes—the death in service of members of his team, and, ultimately, a tragic conclusion to the story of his missing son in Series Seven (a tale for another day)—and perhaps a character shift wouldn’t ring true either, a pat resolution to a deep-seated trauma. Ultimately, Waking the Dead stands the test of time as an often exceptional creative collaboration that bears all the hallmarks of authentic and engaging drama.

Waking the Dead Series Four is available on DVD in both Region 1 and Region 2 formats.