It was inevitable that this blog would, sooner or later, embrace The X-Files (1993-2002). It is amongst my strongest creative influences, the project that led to me setting up this blog certainly owes a lot to Chris Carter‘s seminal series, and the links between mental health issues and experiences of and attitudes towards supposed paranormal phenomena have their own emerging field: anomalistic psychology.

“Elegy” takes places towards the end of The X-Files‘ fourth season, a year rich in the series’ mythology that finds Special Agent Dana Scully (Gillian Anderson) battling cancer as a likely consequence of procedures inflicted upon her during her earlier abduction. Whilst her own state of mind features significantly during the episode, the investigation-of-the-week centres around Harold Spuller (Steven M. Porter), a sufferer of a form of pervasive development disorder, a complex diagnosis that sits on the autism spectrum. 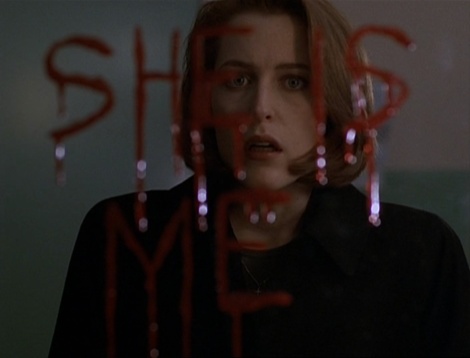 Special Agents Fox Mulder (David Duchovny) and Dana Scully are called in to investigate a series of murders, given that the owner of a bowling alley where Spuller works had a ghostly vision of the latest victim inside the pinsetter machinery at the time of her death across the street. The words “She is me” are revealed by means of forensics to have been invisibly inscribed into the waxy coating on the bowling alley lane flooring.

A 911 phone call was also received shortly before the killing, which is traced to a psychiatric facility where Spuller resides. When Scully spots something of significance in a crime scene photograph—the victim’s wedding ring switched from one hand to the other—she posits a theoretical diagnosis of ego dystonia when Mulder seeks her insight into the potential psychology behind such behaviour.

Scully accurately explains that this is a form of obsessive-compulsive disorder wherein a person has “persistent and inescapable impulses to change things, to organize, to reorganize” even whilst being aware that such behaviour is unreasonable, before going on to clarify that the condition is “not ordinarily something that escalates to a murderous impulse.” It’s an odd moment in that, whilst it preserves the dynamic between the duo—Scully offering a tenuous science-based explanation before Mulder starts exploring his own out-there theories, of apparitions as death omens in this instance—it stands out as somewhat anomalous that Mulder, the skilled profiler and gifted psychology graduate, should seek Scully’s advice on this aspect of the investigation. As such it does neither character justice, and offers a leap of logic in spite of Scully’s caveat.

The pair are permitted to talk to Spuller at the facility, and he becomes extremely agitated during their questioning. Whilst this hardens Scully’s position as regards his potential guilt, Mulder is—to his credit if, naturally, for unconventional reasons—altogether less certain: 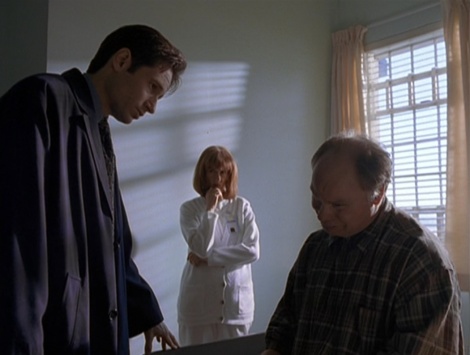 Mental health and the paranormal can be a quite natural fit, as is inferred by the field of anomalistic psychology, but they can also make for uncomfortable bedfellows. On the one hand, there is the tendency to ascribe some “magical” ability to mental health sufferers, whilst on the other there is the potential to write off claims of paranormal experiences in a derisory fashion, as the preserve of the insane. It’s a fine line to walk, and “Elegy” isn’t always successful in navigating it.

Spuller makes for a partly sympathetic character, through his sensitive, empathic nature, but also when we see the heavy-handed treatment he receives at the hands of the local police that are quick to assume his guilt.  We see, too, how Spuller obsesses over how he replaces bowling shoes in their racks after use, and, later, visit a secret room at the rear of the bowling alley where he posts up score sheets that he has memorised in their entirety, reciting them whenever a player’s name is mentioned. Yet it is also inferred that he has a somewhat creepy obsession with some of the girls that visited the alley, secretly keeping photos of them in his room. Whilst such revelations lend a sense of mystery in preserving suspicion upon him, they conform to the stereotype of the mentally ill as either imbued with special abilities or creepy and untrustworthy. Or, as here, both.

It is worth noting that Shiban’s screenplay was in part inspired by One Flew Over the Cuckoo’s Nest (1975), a film most cited by those asked to cite a depiction of the mentally ill acting strangely or violently, although here Spuller is later revealed to be innocent and, ultimately, victimised. And the episode has also suffered some strong criticism for its representation of mental illness.

None of this is to criticise Porter’s portrayal of Spuller, who superbly represents some of the outward aspects of pervasive developmental disorder in his social awkwardness and body movements. Invited to audition for the role by former college friend and series producer Frank Spotnitz, companion chronicle of the series “I Want to Believe: The Official Guide to The X-Files” (Andy Meisler, 1998) tells of just how he came to inhabit the role:

Many of the gestures and tics Porter used in the episode were products of his research, in several mental hospitals and adult group homes, for [an original play he had appeared in previously called] “Asylum”. In fact, he says, a certain flapping-hand movement became so vital to his portrayal of Harold that he kept doing it even when looping some dialogue in the recording studio after filming had wrapped.

It is noteworthy, too, that today Spuller’s “atypical autism” diagnosis would most likely be termed pervasive developmental disorder not otherwise specified (PDD-NOS), following the reclassification of disorders on the autism spectrum in the latest edition of the American Psychiatric Association’s “Diagnostic and Statistical Manual of Mental Disorders”. The complexity and changing nature of these definitions speak to the uncomfortable reality of how little we truly understand such conditions.

On a more positive note, the mythology and character-led subplot of the episode offers its most affecting scenes. After Scully witnesses her own ghostly apparition of an impending victim and the words “She is me” appear to her from nowhere on a restroom mirror in blood, she visits her counsellor, Agent Karen Kosseff (Christine Willes) to discuss her state of mind. Anderson’s Emmy Award-winning performance sells her predicament utterly throughout both this episode and the entire season, including in this scene: 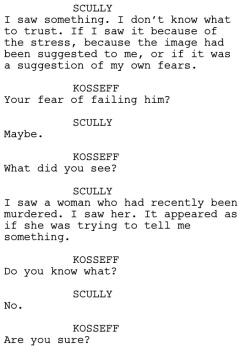 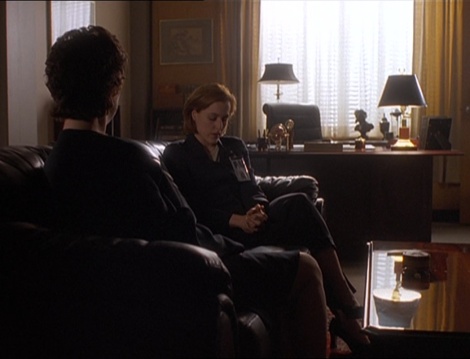 Sadly, the weakest element of “Elegy” is its clumsy denouement. From nowhere, it is revealed that the killer is in fact Nurse Innes (Nancy Fish), a mental health professional in a position of care over Spuller, who verbally and physically abuses her patient, and is in the habit of denying him his medication and consuming it herself. This is utterly bizarre, not least in its suggestion that the potential side effects of the drugs clonazepam and clozapine might act to induce a campaign of serial murders, thus forming part of her motive in the killings alongside her own severe emotional pain. Furthermore, the character of Innes has done little throughout the episode to this point save stand awkwardly in the background during Spuller’s initial questioning by Mulder and Scully.

It is true that the potential side effects of clonazepam can, in rare cases, be to induce aggressive behaviour or even a shift in personality, and so perhaps a case could be argued that Shiban’s script is seeking to make some comment on the dangers inherent to such powerful medication. Given how briefly the topic is covered, though, this rushed conclusion to the investigation does neither the mental health care profession nor pharmacology any favours, even within a fictional context that seeks to explore the realms of extreme possibility.

The more successful emotional through-line of the episode is summed up in a final exchange between Mulder and Scully, in which Mulder delves deeper into this theory over death omens that unwittingly disturbs Scully yet further:

Mulder’s willingness to pose such a seemingly unlikely explanation of course speaks to his own complex psychological history, scarred by the as yet unexplained abduction of his sister when he was a child. It would seem that he is right, however, as Spuller dies soon afterwards from respiratory failure, and a tearful Scully has a final vision of him when she sits alone and forlorn at the wheel of her car in the episode’s final moments. Her continuing mental battles over her life-threatening illness bring the instalment to a shattering conclusion.

“Elegy” is at times very clumsy in its handling of mental illness and its periphery, and yet the gloss of so many aspects of its production—foremost the performances of its leads—goes some way towards rescuing the episode from its failings. The phenomenon that was The X-Files touched upon anomalistic psychology repeatedly throughout its remarkable run, and that alone means this blog will return to its rich canon in the very near future.